Part of the reason I started my blog was to peel back the layers on what motherhood in the west looks like- which in the mainstream…is lily white. It’s part of the problem I have with shows like Parenthood or the Canadian mom show Workin’ Moms.  But even though I know this, sometimes I’m still genuinely shocked to see that my motherhood is barely ever reflected in mainstream media. Can I just say…black women are awesome mothers too, we struggle, we love our kids just as much, we do all the same crap every other mom does, we face the same issues…including…post depression,  which brings me to Brooke Shields’ Netflix documentary When The Bough Breaks. I stumbled across this during my Netflix binge over the holidays.  You know- during the cold snap when we literally couldn’t leave the house for fear of our eyelids freezing shut in seconds.  So we stayed indoors and I binged on Netflix.  It was glorious.  In that self indulgent haze, I stumbled across Brooke Shields’ postpartum documentary.   All I can say is she needs to seriously expand her view of motherhood.

If you just watch the first 40 minutes of this documentary, you would assume two things:

It took a full 40 minutes, in a documentary where the first thing they said is that postpartum depression sees no racial or class boundaries, before I saw a face that wasn’t white.  And that first face was in fact nearly white, a fair skinned woman of south Asian descent, the black face and her story appeared at minute 52.

It really distracted from the documentary which actually has a very compelling story, that needs to be told.  Shield’s is right about the fact that we need to talk more openly about postpartum depression. We need to get rid of the shame and stigma that’s associated with it.  The fact is, birthing a baby is traumatic.  The best thing my family physician ever said to me was acknowledging this fact.  She told me my body had just undergone ‘major trauma and would need at least two years the heal,’  and that’s just physically.  Often we are so focused on the physical, we forget to take care of our emotional self.

One of the things I learned watching this doc., is that postpartum can actually last YEARS after giving birth. One of the women had a seven-year old son and was still in therapy.  This makes so much sense to me.  I get it.

While I didn’t have postpartum depression, I definitely had the baby blues.  When the 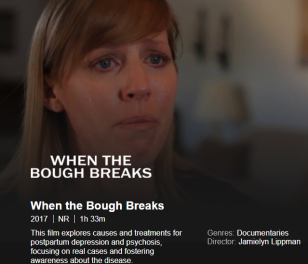 boy child was born, I was so excited, there was this instant wave of love that was there well before he was even delivered, but when I got him home that first week, I was convinced he hated me. Every time he nursed in the first month or so, I would stare down at him, slightly freaked out by his intense glare.  I was convinced, he was giving me evil looks (which sounds completely irrational and it was – but it’s the truth).  I also had post traumatic stress with him. For quite a while after the delivery, I’d go into these slightly catatonic states where I’d get flash backs remembering the trauma of his birth.    And it wasn’t even a particularly horrible birth, it was just nothing like I could have imagined and more painful that I could have imagined, because apparently epidurals don’t work on me.

With the little madam, I was a much more confident mom, but I had complications from the delivery that required a home nurse to come in once a week for like 4 months, I had the boy child, I had a busy job leading up to the birth- so I really felt so disconnected from her when she was born.  I went through the motions, but she was a little stranger to me.  I felt like I  had to get to know her.  Today, as I watched her spend a good 10 minutes trying to literally climb into the fridge, yes climb INTO the fridge to get the butter to spread on her bread, because she was mad at me and didn’t want to talk to me. I marveled at the fact that I ever thought I’d have to get to know this determined, funny, exuberant little human.   Her heart beats in tune with mine.  But with hormones ranging, down in the weeds, you don’t see that.

My point here is that as mothers, we all have the same struggles, black women have an added layer of struggle that can complicate and feed into every aspect of our family lives, but at the core, our stories are similar and ensuring our voices are heard…not an hour into a documentary, but right from the beginning is essential.
Representation matters, not just for children of colour, but for their parentes too, particularly for mothers….black mothers, who need to shed the stigma of survival, and strength and toughness in order to face our own truth. Hearing someone else share thiers is the first step.

If you're a socially conscious mom follow #WokeMommyChatter. It's a space where I'll blog about social issues from a mommy POV. It won't always be comfortable reading...prepare to be challenged. Of course they'll also be posts about parenthood, kids and the need for access to a winery year round to survive;). You can also follow me on Twitter @wokemommy https://www.facebook.com/wokemommy/ View more posts