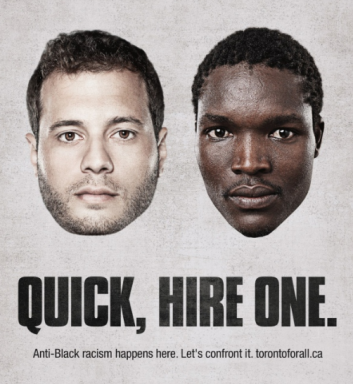 There’s a quiet support that black people have for one another in the workforce (usually). It’s an invisible fist bump, a look, a half smile, an acknowledgment that says, ‘you made it brother, you are here sister, I see you’.   For black women, that is double true.   In so many workplaces, emphasis is placed on this idea of the glass ceiling.  That the barriers to getting ahead at work are solely based on gender, and that if an organization does their due diligence, ensure’s their workforce is well balanced with men and women, that they somehow deserve a pat on the back for reaching tremendous goal.

The truth is that in 2016, the real issue with workplace diversity is not the glass ceiling, but the concrete ceiling.  It’s the fact that people of colour that rise above senior or management positions to executive level positions, even if they are well qualified for the role.  And that is when they have a job!  If you are black and out of work, chances are you will be looking for work longer than a white counterpart.  There’s a CBC article that talks about the particular stresses black women face when they are looking for work.

The pressure many black women feel of having to straighten their hair for an interview. I know this is always a stressful for me and I can honestly say that i have never been to an interview with my natural hair. Would I go to an interview today with natural hair? Yes, I would. Would I have done it two years ago. Most definitely not!

So, The City of Toronto has launched a campaign to target anti-black hiring practices. This is good news, in that it raises awareness about a very real issue and forces people to confront any bias’ they may harbor.  The question is, what happens when a black person does get the job?   We know well paid full time work, with vacation and benefits are hard to come by, but for minorities, these jobs are even harder, even rarer.  How do we ensure that a rash of minority hires aren’t contract hires, forced to work short term contracts to a. fill a quote set by an employer and b. ‘prove’ that they are worthy of a full time job (something many of their white colleagues wouldn’t have to do).  I think often people of colour are hired, but they are hired on terms, maternity covers or contracts, because companies simply are not willing to take a chance and invest in hiring them full-time, because they aren’t certain it will work out.  The trouble with this uncertainty is that it doesn’t extend to all employees.

If you're a socially conscious mom follow #WokeMommyChatter. It's a space where I'll blog about social issues from a mommy POV. It won't always be comfortable reading...prepare to be challenged. Of course they'll also be posts about parenthood, kids and the need for access to a winery year round to survive;). You can also follow me on Twitter @wokemommy https://www.facebook.com/wokemommy/ View more posts